5 Types of Mold in Air Ducts 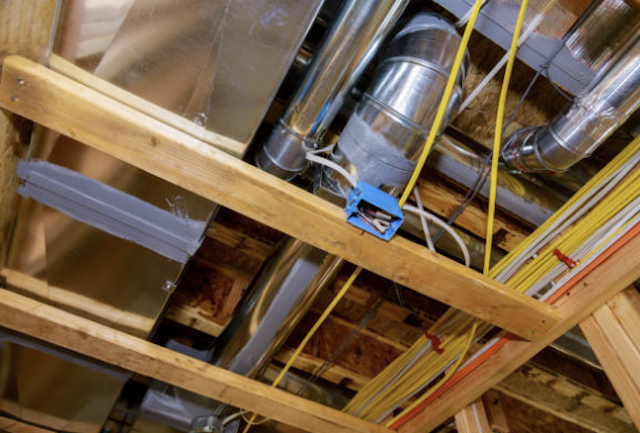 The conditions that mold finds ideal are dark, moist, and warm. Your home provides more than a few places that meet these criteria, including the kitchen, bathrooms, attics, basements, and crawl spaces.

Another area that frequently develops mold is the HVAC system. Mold in the air ducts can spread all over your home, spores riding on the air that heats and cools it. Keeping your air filters changed is one way to prevent mold from spreading, but that’s not the source of the issue. Air filters don’t address mold within your air ducts and HAVC system.

Mold can have terrible physical effects on loved ones with respiratory conditions. Mold is also especially dangerous for infants and the elderly.

Therefore, you need to be proactive about mold removal for air ducts to prevent a widespread mold problem.

What Kind of Mold is Found in Air Ducts?

Once you establish that there is mold in your home, it can be helpful to know what kind it is. Some molds are very dangerous (toxic), while others pose similar risks as pollen and other common allergens.

Regardless of what type of mold is in your air ducts, you need to have it removed. The particular types of mold may require different treatment methods, and some may even require you to evacuate your home until it is gone.

Another factor is the severity of the mold infestation. Frequent inspections will catch mold in the air ducts before it gets completely out of control.

Below are some of the common mold species that are found in HVAC systems, particularly the air ducts.

Stachybotrys is commonly called black mold. It is widely recognized as the most dangerous mold variety, but, in fact, there are many mold species that are equally dangerous. Stachybotrys and these other molds release mycotoxins that are known to cause neurologic issues, headaches, severe allergic reactions, and many other serious side effects.

This mold spreads quickly, so it is hard to eliminate. The rapid reproduction rate is a nightmare when Stachybotrys finds its way into a hidden area like an air duct. It feeds on cellulose, which can be found in dead organic matter or indoor items like cardboard, paper and dust.

Stachybotrys causes allergic reactions in many people, especially those with existing allergies. The mycotoxins it releases can affect anyone as well.

Chaetomium can be hard to identify because it changes colors over its lifetime. It begins its life cycle white and fuzzy, but then transitions into a dark blue-green, almost black, is maturity.

It’s favorite food source is cellulose, which is why Chaetomium is found in abundance  outdoors in soil, rotting woody plants, and compost.

This mold spreads quickly. This behavior and its dark hue have led to Chaetomium sometimes being called “the other black mold.”

Unlike Stachybotrys, you don’t have to worry as much about mycotoxins if there is Chaetomium in your air ducts. However, it does lead to dangerous infections in humans and animals.

Acremonium can be grey, pink or orange, but it is most commonly a yellowish white.

Protecting your home from this mold species should be prioritized. In addition to causing allergic reactions and allergy-like symptoms, it is also highly toxic, known to cause cancer, bone marrow disease and compromised immune system, even in previously healthy people.

Ranging from grey to brown, Mucor can also be identified by its uniquely sweet odor.

It is commonly found in soil and is often associated with rotting organic matter. Mucor is usually found in thick colonies where condensation is present indoors (like air ducts).

Mucor is one of the less dangerous mold varieties on our list, but exposure to it can still lead to allergic reactions and allergy-like symptoms. Any mold, regardless of how “harmless” it is, should be removed from your home ASAP.

Tricoderma is typically white with green spots throughout the colony. It loves wet surfaces and can often be found on air filters as well as windows where condensation is present.

Tricoderma is highly resistant to anti-fungal treatments, so it is extremely hard to get rid of. In addition, it adapts well and can live in virtually any environment as long as its basic needs (oxygen, water and food) are met.

Homeowners have to be aggressive in their maintenance and mold treatments to keep Tricoderma at bay. It’s best to prevent this and other types of mold versus the complex treatments that it will take to remove it from enclosed areas like crawl spaces and air ducts.

Spotting mold in a bathroom or garage is an easy enough job, but when it’s deep within the HVAC system, finding mold becomes a much harder feat.

Inspecting the air ducts is a difficult task even if you know what you’re looking for. To be sure that your ducts are mold-free, have a mold team from Pure Maintenance of St. Louis come in and do a full inspection. Our pros will use testing and tools to reach into air ducts — and other tight spots — to find mold anywhere it’s likely to hide.

A professional mold inspection, done every year or every few years, is a great way to gain peace of mind about hidden mold in your home, and it is one of the best ways to prevent widespread mold problems throughout your home.