Mold 101: What Are Mycotoxins 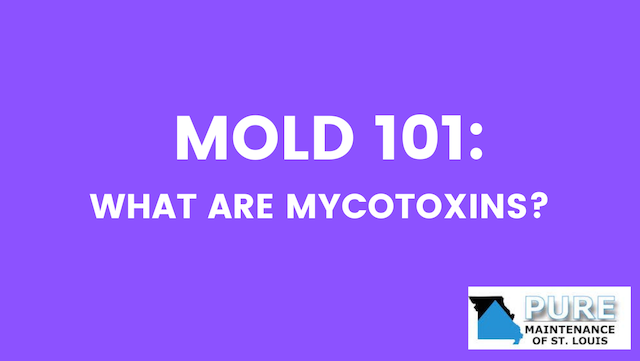 Mold spores are in the air and on surfaces around us most of the time. We don’t always have an allergic reaction to these mold spores because they are present in very small amounts.

Reactions occur when we are in close contact with mold for extended periods of time. People with allergies and respiratory conditions experience side effects in the presence of mold. But when the mold growth is extensive, anyone can feel its effects.

But when you are exposed to black mold, which produces dangerous mycotoxins, the effects can be much worse and its best to have a specialist from Pure Maintenance of St. Louis perform testing to understand the extent of the exposure in the event mold remediation is necessary.

Mycotoxins are chemicals that are produced by some species of fungi.

It is believed that mycotoxins are an organism’s way of defending itself, reduce competition for food sources, and make it easier for the organism to infect a new host.

There are over 3,000 identified mycotoxins, but experts estimate that there may be as many as 300,000 in existence.

As a fungus, mold produces mycotoxins. But before, you get too worried, let us say this: Not all molds produce mycotoxins, and not all mycotoxins are toxic. If you find mold in your home, identifying it will determine how dangerous it actually is.

How Mycotoxins are Related to Mold

Mold can cause sickness, including allergic reactions, skin rashes, headaches, and respiratory problems. Those with allergies are more likely to experience a mold reaction, but anyone is capable of experiencing these symptoms when in contact with mold.

Even if you do not have a mold allergy, you can have a reaction to mold.

Why is this? Mycotoxins.

Mycotoxins can cause other health problems, unrelated to mold allergies:

Mycotoxins are harmful to people, but they can also affect pets, plants and even other molds! Removing the organism that is producing the mycotoxins is the only way to rid your home of them.

How are Mycotoxins Produced?

Mold growth can occur in a home just 48 hours after flooding, leaks, or spills. A single mold spore can reproduce over and over again to form a visible colony within days, and if it’s a specific type of mold, the colony will begin producing these chemicals, known as mycotoxins.

Infamous black mold is known for producing the most toxic mycotoxins. Black mold, or Stachybotrys, occurs in areas of prolonged moisture and usually in less-traveled areas of a home, like the basement and attic.

Mycotoxins will be higher in an area where there is more than one type of mold, since they seem to be a defense mechanism for their original mold source. Mycotoxin production will go into overdrive when they sense a need to protect the mold’s food source or available space.

Mycotoxins are produced by some varieties of mold. Therefore, you are more likely to find them where mold is present.

The 2 things mold needs to survive are moisture and food. When mold spores find the right combination of food and moisture, they are highly likely to settle and form a colony. Mold prefers warm, dark, undisturbed areas, but it can grow anywhere. This puts your entire home at risk of mycotoxin exposure.

Mold and mycotoxins are also found in foods, especially when poor storage practices are used.

How do you know if your symptoms are the result of mycotoxin exposure or something else altogether?

You have to think outside the realm of typical mold exposure symptoms, because mycotoxins can cause much different effects.

Mycotoxins, on the other hand, lead to more serious symptoms, such as:

Long-term exposure to mycotoxins can lead to constant sickness due to a weakened immune system, and it can cause symptoms similar to autoimmune diseases.

The following symptoms are less severe but can be uncomfortable and dangerous to live with day-to-day:

Avoiding exposure to mycotoxins is the only way to prevent these chronic, often irreversible, symptoms.

How to Avoid Mycotoxins

There are several ways to protect yourself from mycotoxins. Due to the direct link between mycotoxins and mold, the first priority should be ridding your home of mold.

In addition, you should remove other sources of mycotoxins and remove excess mold and mycotoxins from indoor air.

Here are a few tips for avoiding contact with dangerous mycotoxins: